A Russell Rebalancing Opportunity in 2021

In our portfolios, we have been adding bank stocks that will likely be removed from the Russell 2000 Index in June 2021. Due to anticipated index fund selling, these banks are trading at significant discounts to their fundamental fair value. We expect these discounts to start closing later this year. We remain very constructive on U.S. bank equities and believe this dislocation presents an excellent opportunity to generate alpha in our funds.

The Annual Rebalancing of Russell Indices

The Russell 2000 Index is the benchmark of choice for institutional investors looking to track the performance of small cap stocks. Many investment funds are indexed to the Russell 2000, and when the index is reconstituted, these funds need to adjust exposure and purchase the stocks going into the index and sell those being removed.

Index funds own approximately 8% of the market cap of Russell 2000 companies, and their trading activity around the time of index rebalancing has a material impact on public market valuations.

Despite what underlying fundamental performance may suggest a company’s valuation should be, the rebalancing-driven buying and selling of these index funds tend to dictate what it is in the short-run leading up to the official reconstitution date in late June, creating inefficiency in the market.

The surge in IPO activity in the past 12 months has been remarkable. More than 850 companies have gone public in the U.S., raising a record $173 billion, the highest level of activity dating back to February 1997. Many of these IPOs were SPACs looking to purchase private operating companies aiming to go public. Once a SPAC purchases one of these companies, they are eligible for inclusion in the Russell 2000. The market cap threshold for inclusion in the Russell 2000 has risen to $257 million, the highest since 2007.

U.S. banks have lagged the post-pandemic market recovery, and as a result, many will be dropped from the Russell 2000 this year. Taking their place will be new public companies, mostly unprofitable targets of SPACs that have closed deals.

The latest estimates suggest 81 financial services companies will be deleted from the Russell 2000 Index this year, which is a record over the time we tracked the data back 14 years.

The prospect of being removed from the Russell 2000 Index has resulted in a remarkable dynamic for the banks we follow, as they have witnessed meaningful selling pressure in the first half of the year. Nearly 8% of their index fund-owned shares need to be sold, equating in some cases to 20 to 30, even as high as 50 days’ worth of trading volume. Many of these banks are and will continue to report record profits this year in a post-pandemic economic recovery, but their shares have been relentlessly sold as the index funds need to make room for new additions of companies with higher market capitalizations (many of them are not profitable at all).

The banks that are projected to leave the Russell 2000 Index in June have underperformed the KBW Regional Bank Index (KRE) by 21% YTD in 2021. 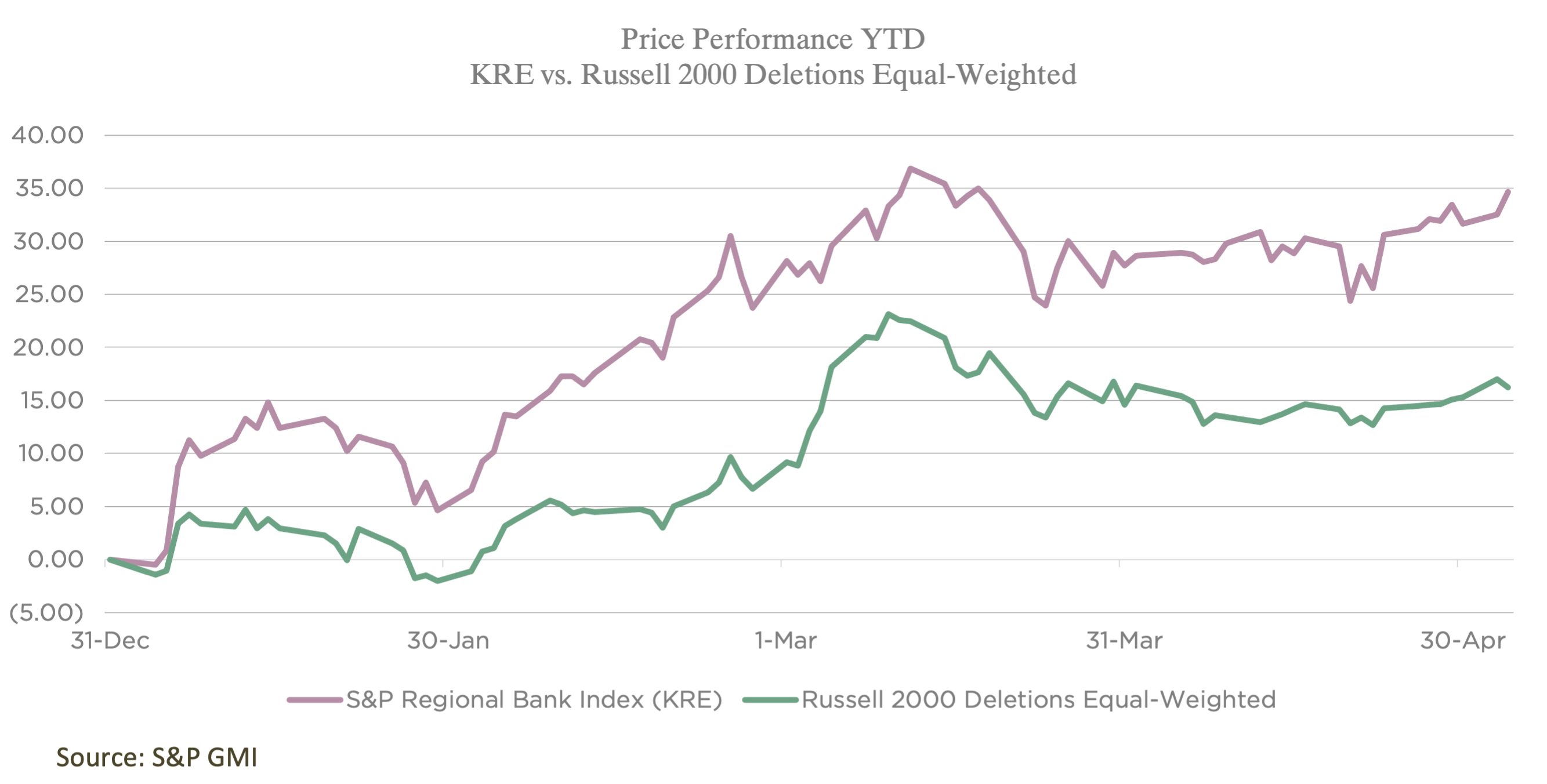 Bargains Abound for the Patient Investor

As bank investors, this is an exciting time when we can purchase solid franchises at 21% off simply due to the fact that a frenzy of SPAC IPOs and acquisitions have forced a large number of small cap banks out of the Russell 2000 Index.

The relative underperformance of these small cap banks will reverse once the selling pressure abates following the index rebalancing.

Below is an example of a bank that was excluded from the index in 2019—it materially underperformed in the first half of the year and then outperformed in the second half. We believe history will repeat itself with many of this year’s Russell exclusions, and this is one of the key investment themes in our financials funds.

Although we maintain a constructive approach on U.S. bank equities in our investment funds, we have welcomed this dislocation and believe it will result in relative outperformance of our portfolios. Petiole has added banks that will be removed from the Russell 2000 index in June 2021, and these are trading at significant discounts to their fundamental fair value due to index fund selling. We expect that discount to start closing later this year.

The Resilience of Private Equity During Recessions

Drago Kolev is Managing Director of Petiole USA Limited and leads the Financial Institutions Group. Drago has over 20 years of experience as an investor, senior bank executive and investment banker. In 2009, he was a founding partner and Head of Acquisitions for Community USA HoldCo, an investment company specializing in distressed bank investments. Prior to that, he was Head of Portfolio Strategy for Merrill Lynch Bank USA. Drago started his career as an investment banker at Merrill Lynch where he was last a Director in the Corporate Finance Group. Drago holds a Bachelor of Arts degree in Economics and Mathematics from Williams College, Massachusetts. He graduated from the Merrill Lynch Institute of Investment Banking at the Wharton Business School and holds a Chartered Financial Analyst (CFA) charter.