The U.S. Federal Reserve is hiking interest rates sharply this year to crack down on surging inflation. Amidst expectations that this trend will continue, many headlines are warning of a looming recession – defined as two consecutive quarters of negative growth. Whether the economy will shrink or growth will merely slow down to a near halt remains uncertain. But should investors be concerned?

While the exact causes of the economic cycle are highly debated among economists, they could come as a simple fact of life for investors. The economy experiences a continuous cycle of four phases, much like the seasons of the year: expansion, peak, trough, and recovery -all are characterized by sharp fluctuations in investment trends and investor behavior.

The following chart shows the GDP trend over the last 70 years of U.S. economic history against periods of recessions. 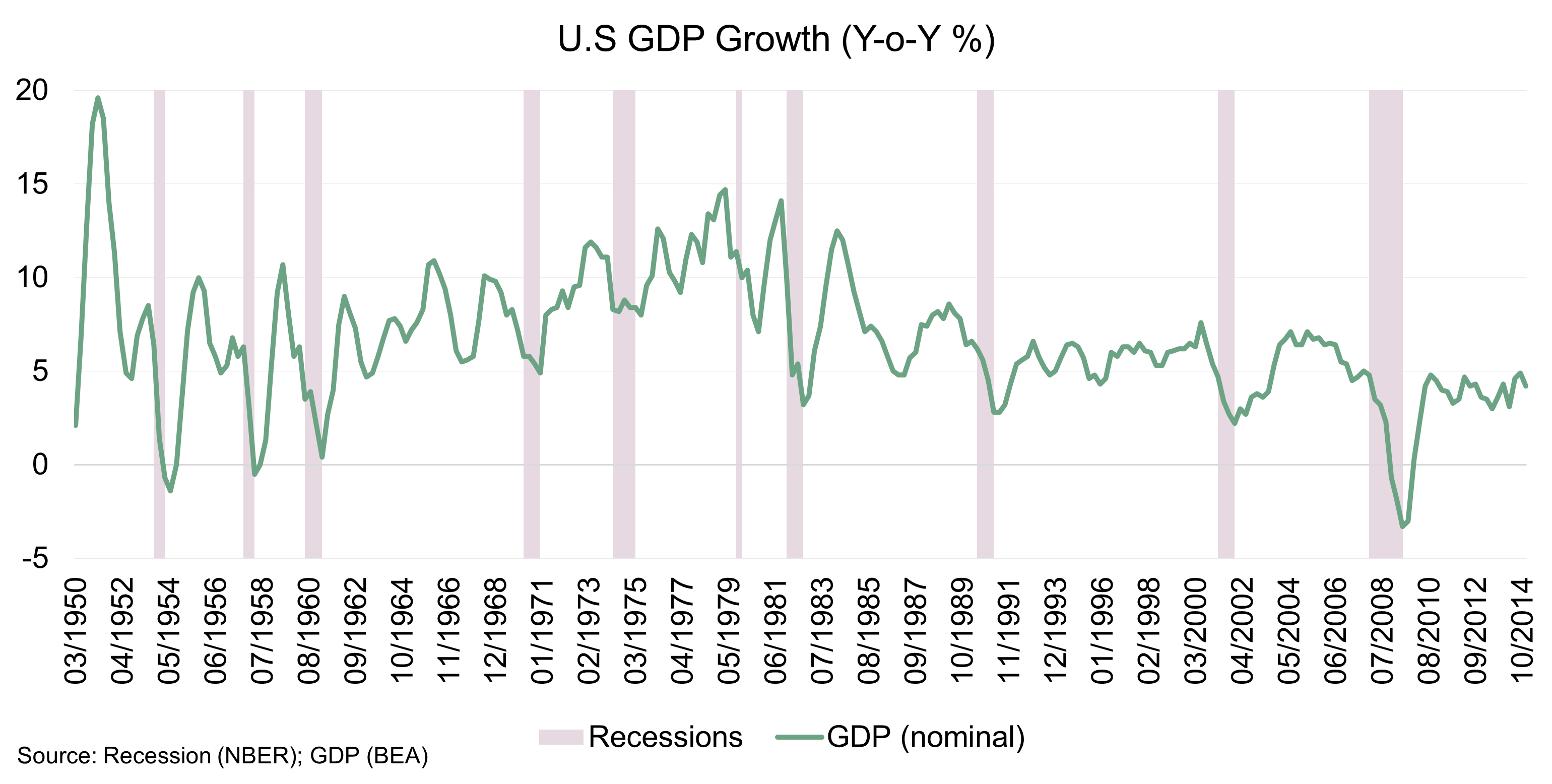 Psychology may well drive this cycle. Business, consumer, and investor sentiments swing from fear to confidence and ultimately overconfidence, where people may borrow and invest too much and drive prices too high. In terms of the financial markets, retail investors in particular could be notorious for buying instruments when the market is booming (and paying too high a price) and selling when the market is falling (and hence suffering a loss). One common thread is that a recession is often difficult to predict, and once in the depths of a downturn, it can be hard to see when the recovery will get underway.

At the beginning of this year, for example, few investors would have predicted that Russia would invade Ukraine and cause a further supply shock to the global economy – on top of the lockdowns imposed during the pandemic – that would fuel inflation and prompt the cost-of-living crisis and monetary tightening that is now threatening global growth.

Will a Recession Hit Investment Returns?

Economic recessions do tend to be associated with bear markets: a prolonged period of falling equity or bond prices, usually by 20% or more. Since the Second World War, 10 of the 18 bear or near-bear markets that have taken place in the U.S. have been followed by recessions. Monetary easing by the Federal Reserve was the main reason why the remaining eight recessions did not see bear markets.

Given that the Federal Reserve appears committed to its policy of monetary tightening to counter inflation, it seems unlikely that the Fed will ride to the rescue this time. Indeed, it now seems likely that the Fed could act even more aggressively than anticipated, a stance that would increase the possibility that the U.S. economy will likely fall into recession. In June, consumer prices rose by a faster-than-expected annual rate of 9.1%, the biggest jump since November 1981. Consequently, there is a significant chance that the Fed will hike rates by a full percentage point at its 26-27 policy meeting, rather than the previously expected 75 basis points.

It is not all bad news, however. A recession and a bear market can provide long-term investors with the opportunity to acquire attractively priced assets from distressed sellers.

Indeed, there is plenty of evidence to the contrary. China, for example, has enjoyed an economic boom over the past few decades. In fact, its GDP has increased twelve-fold over the past 30 years - yet the MSCI China index (US$) is lower now than it was in 1992. U.S. stocks have grown ten-fold over the same period despite an economic background of much lower growth than that seen in China.

Focusing on trends in GDP could lead to the wrong conclusions about the direction of financial markets and individual assets. It is far more valuable for investors to focus on the quality of an asset in terms of its earnings, its management, and its ability to generate earnings almost irrespective of the economic background. That means conducting rigorous research into the merits of individual businesses, which requires a thorough understanding of the sectors in which they operate.

At Petiole, we also focus on themes that will continue to provide opportunities despite any slowdown in the economy, such as U.S. financials, which should benefit as interest rates rise.

Pragmatic portfolio construction is also key to prospering during a recession, i.e. having a wide exposure to a variety of assets, including real estate, infrastructure, private equity, and private debt. Moreover, it is important to ensure diversification among these assets with exposure to a spread of geographical markets and industrial sectors.

For instance, some sectors are more susceptible to an economic downturn than others. Companies that supply basic consumer goods or services, such as food, household supplies, or healthcare products, are unlikely to be critically affected, as demand for their products will continue almost regardless of the economic environment. On the other hand, companies that have borrowed heavily to finance their expansion may come under pressure as interest rates rise, as well as companies supplying luxury and discretionary items.

Shielding Against Volatility in Listed Markets

It is also important to remember that private markets differ from listed markets in some key respects. Concern about the economic outlook has caused considerable volatility in public markets this year. By the end of June, the S&P 500 had fallen by nearly 20% in dollar terms over the year to date, while bond yields had risen significantly – more than doubling from their starting point for the year - to exceed 3%. However, private markets are much less volatile than public markets. There is plenty of evidence to support the contention that private markets outperform during recessions (as well as over the entire economic cycle).

The following chart compares the performance of private vs public equities in periods of recession. 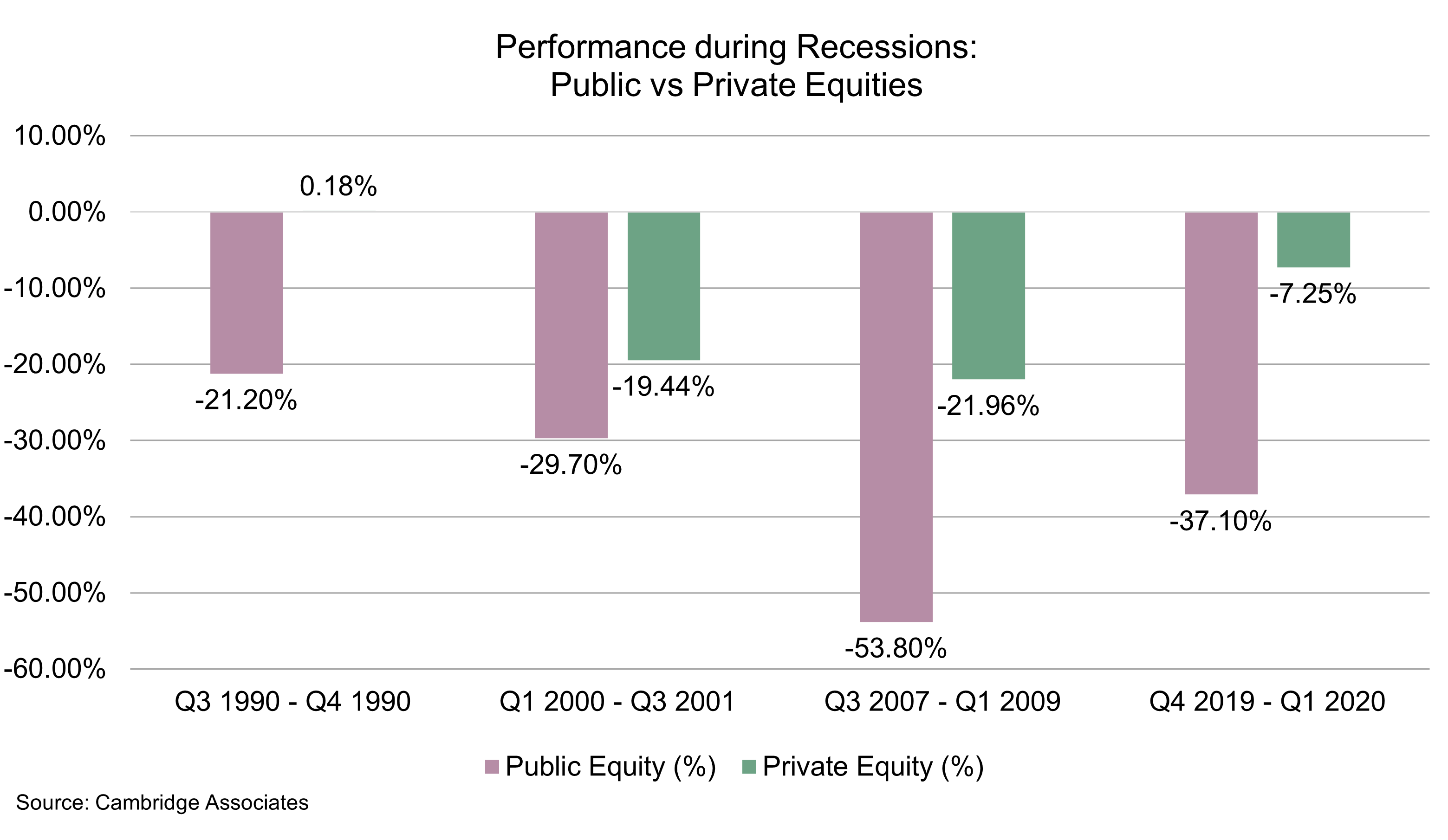 • However, a recession can provide an opportunity for long-term investors to pick up attractively priced assets

We have been applying dynamic allocation to private market assets across multiple economic cycles in the last two decades. Contact us today for expert advice on investment portfolios and strategies during challenging market environments.