Within the multifamily market, two interesting themes soon emerged: suburban properties strengthened versus urban ones, and the rapid rise in home values triggered increased demand for multifamily units. Remote work and pent-up demand for open space post-quarantine led to a flight from cities and increased consumer demand for suburban housing in markets that were previously underappreciated. At the same time, median home price appreciation accelerated in late 2020, with Zillow reporting a year-on-year increase of 10.6% as of March 2021, the largest increase since March 2006 and well above the 10-year rolling average of 4.2%. Consequently, more aspiring buyers found themselves unable to afford a home and opted for suburban rentals instead. With these macro shifts still developing, a clear opportunity surfaced to capitalize on them in a resilient market with limited supply.

With a population of over nine million, the Chicago metropolitan area demonstrated comparatively stable rents throughout the pandemic. This stability mirrored the area’s resilience during the Global Financial Crisis (“GFC”), when rent declines in Chicago were minimal and the recovery there was quick compared to other major U.S. cities. Greater Chicago also boasts strong employment opportunities as home to the headquarters of many Fortune 500 companies.

The North DuPage County submarket had the highest historical average rent price increase among Chicago suburbs over the past five years, due in part to a well-established school district and a lack of new multifamily supply. As of early 2021, average occupancy in North DuPage was also among the highest of the suburban submarkets at 96%. Owing to significant development barriers in the Chicago market, the lack of new multifamily units in North DuPage is expected to continue, with supply in the county planned to increase by less than 1% over the next three years.

Given compelling macro themes and the historical strength of suburban Chicago real estate, Petiole invested alongside Golub & Company in the acquisition of Lakehaven Apartments in April 2021. Lakehaven is an established multifamily asset in North DuPage County’s Carol Stream, which features significant park and retail amenities within commuting distance of Chicago’s city center. In recent years, high land costs and an abundance of single-family homes prevented any new multifamily development in Carol Stream, meaning minimal competitive threats to Lakehaven. The property also has strong amenities and 492 units across an array of floor plans, distinguishing it as the only multifamily asset of its quality and size in Carol stream.

Lakehaven represented an opportunity for investors to buy a stable property with strong historical cash flows that collected nearly 100% of rents through the pandemic. Its already high occupancy was trending above its 10-year average at the time of acquisition.

Though the property had limited near-term capital needs, there was potential to conservatively add value over the hold period. Before Petiole acquired Lakehaven, the previous long-time owner had upgraded all units to the same high-quality standard, promoting efficient operation and leasing to prospective tenants. Alongside Golub, a recurring partner of Petiole with over 60 years of operating in Chicago real estate, a supplemental upgrade plan was developed to add value over time with limited execution risk.

Strong Outlook as Inflation Picks Up

Lofty home values continue to drive demand for multifamily units as more aspiring homeowners have been forced to put off purchases. In Q2 2021, RealPage reported that the number of occupied rental units rose by about half a million, the largest increase since 1993. RealPage also reported that rents on newly signed leases increased by a record 14.6% year-on-year in June 2021, and occupancy matched its record high of 96.5% set in 2000.

Recent concerns over higher interest rates raise questions about real estate cap rates. The chart below shows the negative real bond yields that spurts of high inflation are obscuring. At 6.0% as of July, the spread between U.S. apartment cap rates and real yields was near its highest levels since 2012, implying ample room for cap rates to compress further before rising.

Petiole is increasingly pleased with this investment as the long-term outlook for multifamily properties remains attractive against the current inflationary backdrop. Real estate investments can help protect portfolios in times of inflation, and multifamily revenues grow with inflation as rental rates reprice annually. At the same time, debt service payments remain low due to the historically cheap financing environment. 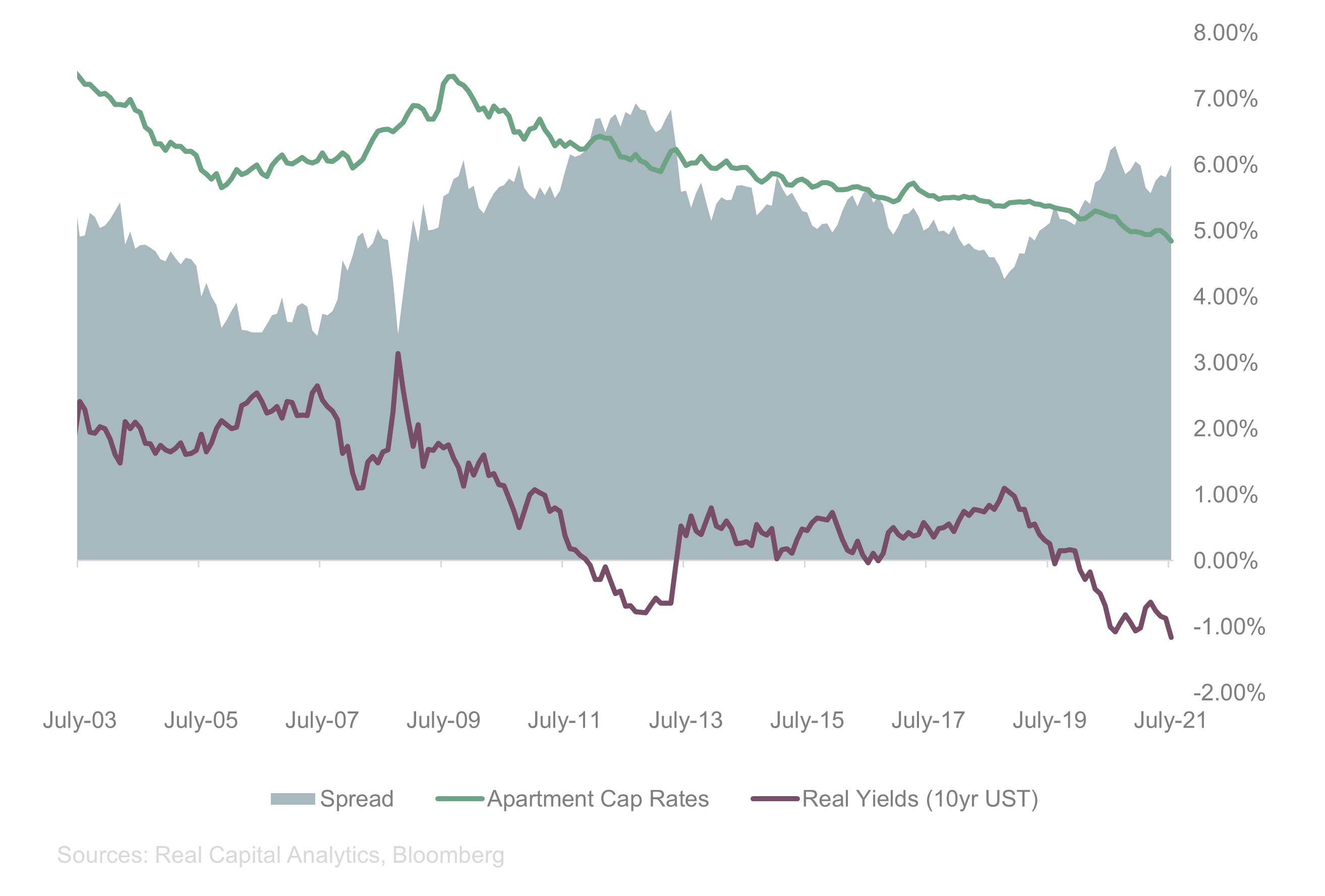 Market Outlook 2022: From Revival to Moderation

Hunting for Real Estate Bargains in the World's Capital

Why Small U.S. Banks are Your Perfect Recovery Trade

Luke Persichetti is an Investment Associate in Petiole USA Limited focusing on private equity and private credit. Prior to joining Petiole in 2019, Luke was an associate at Sandler O’Neill + Partners, where he traded mortgage-backed securities and other fixed-income products. Luke holds a Bachelor of Arts in Economics from Yale University and is a Level III CFA Candidate.

Your experience on this site will be improved by allowing cookies.